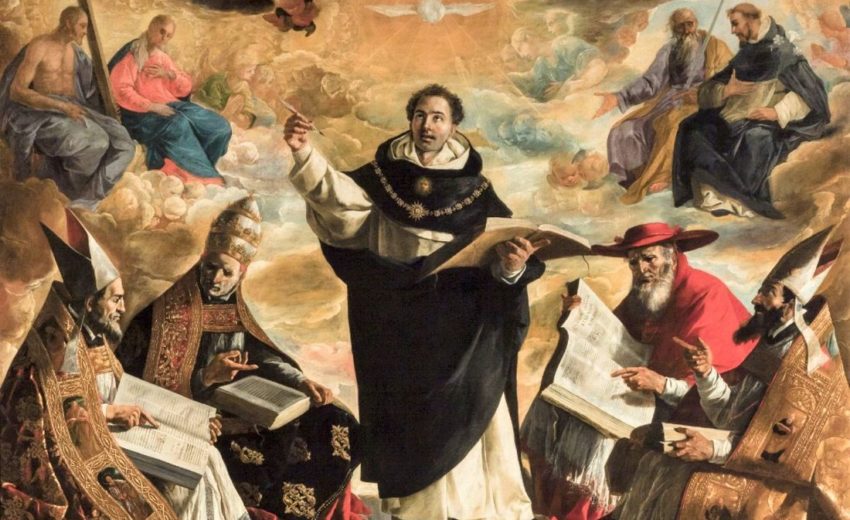 The Summa Theologica is a compendium of theology written by Thomas Aquinas between 1265 and 1273. In Roman Catholicism it is the sum of all known learning and doctrine, of all that can be known about God and humanity’s relations with God — a landmark in the history of theology that famously offers five proofs of God’s existence, the first three of which are cosmological arguments; the fourth, a moral argument; and the fifth, a teleological argument.
The third quarter of the thirteenth century marked the first decisive philosophical encounter between Hellenism and Christianity. The rediscovery of Aristotle’s works after the Dark Ages ushered in a new era of intellectual fervor in Europe, and the work of Thomas Aquinas is a commentary on Aristotle, whose writings were lost to the non-Arabic world until the beginning of the Thirteenth Century. To many, Aristotle’s worldview was a pagan threat to Christianity. To Aquinas, it provided an exciting cosmological framework on which to build an all-encompassing Christian worldview.
His thoughts unfolding with a calmness of order and an assurance of judgment, Aquinas explores in the Summa the primary role of the senses in the acquisition of knowledge and the metaphysical analysis of things in terms of matter and form. But unlike Aristotle’s “God,” who did not care one whit about the world, the God of Christianity, insisted Aquinas, is a personal God. Like Aristotle, Aquinas believed that each human being has a soul and that all created things have a purpose. For Christians, all are part of a divine plan.
This dazzling synthesis of Catholic doctrine has had a profound impact on Christian thinking since the thirteenth century and has become the de facto official teaching of the Catholic Church — the intellectual underpinning of the Church to this day.