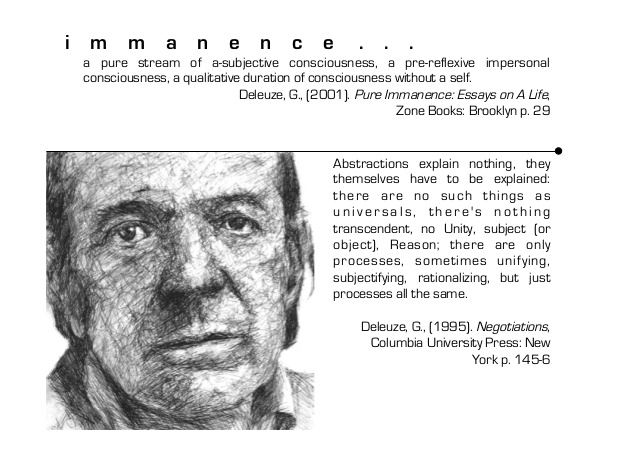 Pure Immanence collects the essays of Gilles Deleuze on a complex theme at the heart of his philosophy. In his last piece of writing, included here, Deleuze gives a simple name to this problem: “a life.” Newly translated and gathered in one volume for the first time, the essays in Pure Immanence capture Deleuze’s persistent search throughout his philosophical work for a new and superior form of empiricism that rethinks the relation of thought to life. “I have always felt,” writes Deleuze, “that I am an empiricist, that is, a pluralist.”

Announced in his very first book on David Hume, then pursued in his early studies of Nietzsche and Bergson and in his later “clinical” essays, the issue of an “empiricist conversion” was central to Deleuze’s thinking, in particular to his aesthetics and his conception of the art of cinema. For Deleuze, such a conversion, such an empiricism, such a new art and will-to-art were, in fact, what was most needed in the new regime of communication and information-machines.

The last, seemingly minor question of “a life” is thus inseparable from Deleuze’s striking image of philosophy not as a wisdom we already possess, but as a pure immanence of what is yet to come. Pure Immanence exposes the new and urgent problems such a philosophy confronts today, one whose most difficult task, the invention of “a life,” has yet to be achieved.