Karel Teige (1900-1951), one of the most important figures of avant-garde modernism of the 1920s and 1930s, influenced virtually every area of art, design, and urban thinking in his native Czechoslovakia. His Minimum Dwelling, originally published in Czech in 1932, and appearing now for the first time in English, is one of the landmark architectural books of the twentieth century. The Minimum Dwelling is not just a book on architecture, but also a blueprint for a new way of living. It calls for a radical rethinking of domestic space and of the role of modern architecture in the planning, design, and construction of new dwelling types for the proletariat. Teige shows how Gropius, Le Corbusier, Mies van der Rohe, and others designed little more than new versions of baroque palaces, mainly for the new financial aristocracy. Teige envisioned the minimum dwelling not as a reduced version of a bourgeois apartment or rural cottage, but as a wholly new dwelling type built on the cooperation of architects, sociologists, economists, health officials, physicians, social workers, politicians, and trade unionists. The book covers many subjects that are still of great relevance. Of particular interest are Teige’s rejection of traditional notions of the kitchen as the core of family-centered plans and of marriage as the foundation of modern cohabitation. He describes alternative lifestyles and new ways of cohabitation of sexes, generations, and classes. The detailed programmatic chapters on collective housing remain far ahead of current thinking, and his comments on collective dwelling presage communal living experiments of the 1960s and 1970s, as well as the communal facilities in contemporary condominium buildings and retirement communities. 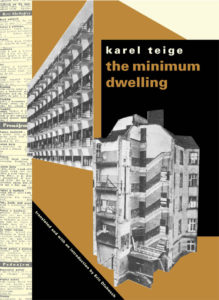