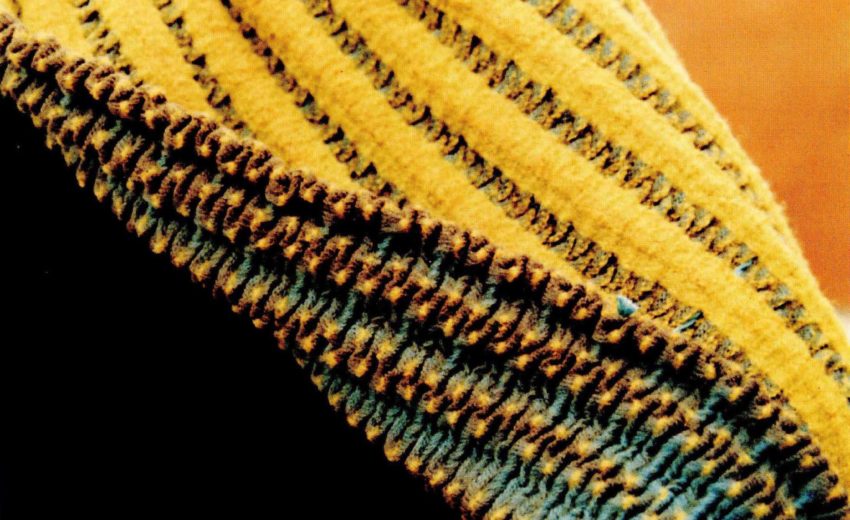 Shibori is infinitely more than the tie-dye that became well known in the late 1960s. Shaped-resist dyeing techniques have been done for centuries in every corner of the world. Yet more than half of the known techniques—in which cloth is in some way tied, clamped, folded, or held back during dyeing, to keep some areas from taking color—originated in Japan.

Shibori can be used not only to create patterns on cloth but to turn fabric from a two-dimensional into a three-dimensional object. The word is used here to refer to any process that leaves a “memory on cloth” —a permanent record, whether of patterning or texture, of the particular forms of resist done. In addition to traditional methods it encompasses high-tech processes like heat-set on polyester (made famous by Issey Miyake’s revolutionary pleated clothing), melt-off on metallic fabric, the fulling and felting that make it possible to turn all-natural fabrics into three-dimensional shapes, weaving resist (in which, for instance, a warp thread can be pulled to gather the cloth to resist dye), and dévorée, in which just one part of a mixed fabric is dissolved with chemicals.

Author Yoshiko Iwamoto Wada has been teaching shibori around the world for nearly thirty years, and helped to establish the World Shibori Network and the International Shibori Symposium. She coauthored in 1983 the authoritative Shibori: The Inventive Art of Japanese Shaped-Resist Dyeing, which in turn inspired many artists to add shibori processes to their repertoire.